The secret service that defends our bodies

A host of ‘germs’ microorganisms from the environment – constantly attack and invade our bodies, where our immune system is ever at war with them. The lymphatic system complex acts as a secret army which begins preparing for war before we are born. When invaders strike they activate teams of chemical dispatch riders – messengers that carry the orders for deployment of troops and their engagement with the enemy. And once an engagement has been fought, the troops remain in reserve against any future attacks by the same invader.

What is the lymphatic system?

The lymphatic system consists of a network of vessels extending to all parts of the body. The fluid in them is colorless lymph, containing white but no red blood cells and valves ensure that the flows only one way, away from the body’s extremities. Lymph also bathes the body’s tissues and is very similar to blood plasma. Disease-fighting white blood cells called lymphocytes originate in the bone marrow and develop and mature in other parts of the lymphatic system, such as the thymus and spleen. The tonsil and other organs are made of lymphatic tissue, but their exact role remains unclear.

The ‘germs’ that invade the human body and live there as parasites include fungi such as Candida albicans, which causes THRUSH the cause of malaria. However, by far the commonest are bacteria and viruses, which are responsible for a whole host of infectious diseases, ranging from colds and INFLUENZA to PNEUMONIA and POLIOMYELITIS.

The immune system protect us from infection attack

Our first line of defense is the skin and mucous membranes, which keep out many would-be invaders. However, close behind is a complex defense system which allows as to remain immune to most infections, even when they do get into the body. That is why is called the immune system. This system must be ready to neutralize or destroy microorganisms and the poisons they make wherever they attack the body, and the extensive lymphatic system fills the bill.

The spleen, thymus gland, tonsil bone marrow, and other bodily organs are vital to it its network of capillaries and lymphatics, or lymph vessels, drain the clear body fluid known as lymph from the body’s tissue and into the bloodstream. And it’s by special cell originating in bone marrow – and complex blood protein molecules antibodies that the immune system mostly does its job. 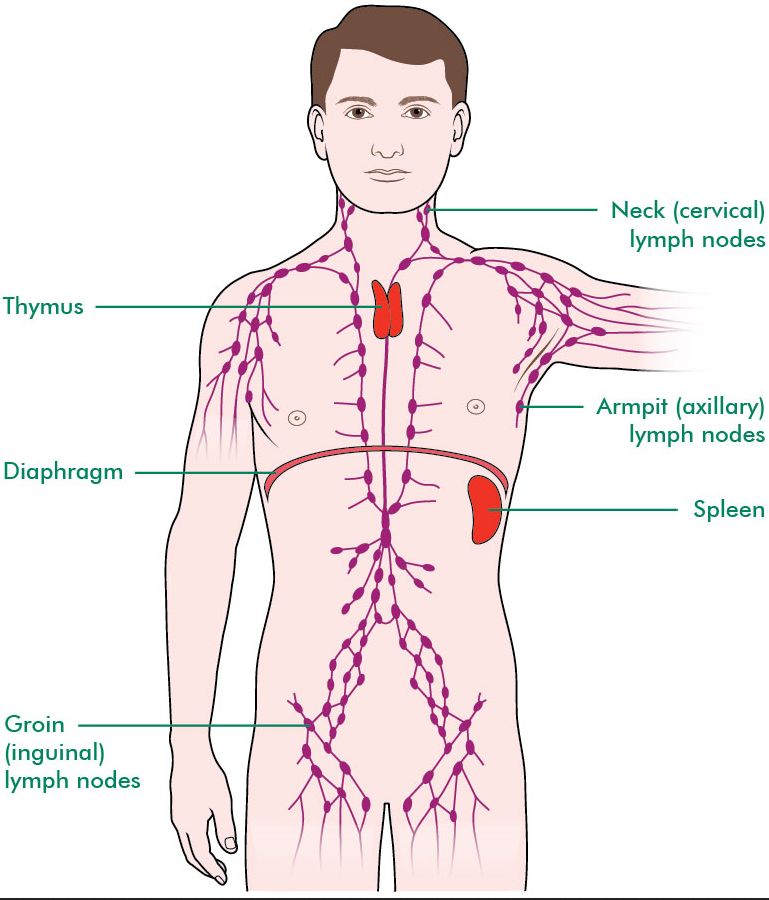 Active and passive types of immunity

We have two kinds of immunity. The first is a very general form of defense that we are born with or acquire through our mother’s milk. This is called passive immunity, and it protects young babies while they are developing their own much more powerful system of acquired immunity. It is called ‘acquired’ because it develops in response to contact for the first time with some new virus or bacterium. Having been acquired, this immunity remains with us, so that the next time we encounter the same organism we can mount a defense against it very quickly.

This one of the immune system’s key features; its ability to ‘remember’ attackers (or pathogens) encountered in the past, recognizing them so it can instantly switch on a set of ready-made defenses. A second feature is its diversity; its ability to develop a whole range of immune defenses against different pathogens.

Immunizing babies involves exposing them to a small amount of the dead or weakened pathogen. The bodies recognize this as a foreign substance, or antigen, and creates a defense against it. In later life, if the child encounters live viruses, the system is ready and only to be activated and directed against those particular invading organisms. But the defenses against measles give no protection against, say polio. Whether by vaccination or direct contact with the disease, the immune system has to develop a host of programs, each defending the body against a particular invader.

Lymphatic System In the front line

The actual defenses of the immune system consist of two closely connected main parts, the lymphocytes, white blood cells which are found in lymph as well as the bloodstream, and antibodies, which are produced by certain types of lymphocytes and circulate in the blood.

Antibodies have a branching structure with special sites shaped to lock on to invading microorganism, or to the poisonous substances, they are producing, and neutralize them. Antibodies also act in another way. When they stick to a foreign cell, the process mobilizes groups of blood proteins known as complement, which have the ability to break up cells and also kill them. It may also be involved in the calling of scavenging cells to the site of the ongoing conflict. The body productions of antibodies depend on two types of lymphocytes. The B-lymphocytes are the ones that first recognize the foreign antigens in the body and produce the first antibody reaction against them. During any subsequent attack by the same microorganism, particular B-cells bill specialized for that antigen mature rapidly and produce the appropriate antibodies in large quantities.

However, they cannot do so on their own. They controlled by the second group of lymphocytes known as T-lymphocytes, so called because they develop and mature in the thymus and the upper chest. There are several types of T-cells. Helper T-cells ‘switch on’ B-cells and suppressor T-cells switch them off again. So the balance helper to suppressor cells is vital for controlling immunity system. Apart from helper and suppressor cells, other types of T-cells play a direct part in destroying invading organisms or even the body’s own cells once they have become called Cytotec T-, which learn to lock on particular antigens on the surface of infected cells in much the same way as B-cells learn to make antibodies, which also lock on to antigens. The cytotoxic T-cells then breakdown the outer walls of the infected cells, thus causing their destruction. Other T-cells are known as natural killers. They do not need to be programmed and can recognize and destroy any foreign materials even if they have not encountered them before.

A number of alternatives therapies suggest ways of boosting the immune system, to make the body better able to fight disease. Avoiding stress and adopting the positive mental attitude and balanced diet rich in vitamins and minerals and certain essential fatty acids are beneficial to boost the immune system.

What Seems To Be The Immune System Disorder?

You haven’t injured yourself yet you feel pain, sometimes chronic. Why does your body like it couldn’t live a cup of tea never mind a heavy bag of shopping? It is likely that the function of the lymphatic system to dispose of waste is not in working order. Your muscles are weighed down with toxins that surround them. This is a probable cause for how you are feeling.

You slept 8 hours last night and woke up this morning feeling great! By midday you start to feel sluggish even needing more sleep, you could actually fall asleep standing up, couldn’t you? The body and mind is crying out to stay awake and these pesky toxins and waste are holding you back making you feel like you could flop.

Lymphoma as varying cancers derived from a type of white blood cell. They are usually discovered when the lymph nodes are larger than the norm with accompanying symptoms such as weight loss and fever. There are different groups which vary from slow-growing to aggressive that can occur at any age.

The fluids that circulate the skeletal system are invaluable to their well-being. The pain of Arthritis and Rheumatism can not only be debilitating but also very stressful to live with each day of your life. A healthy lymphatic system which transports blood and oxygen around the bones will help ease the pain and improve mobility.

What’ holding you up?

Manual lymphatic drainage massage strengthens the immune system and improve lymph flow and drain toxins and pathogens out of the body.

Ben has been a practical pain management trainer and a celebrated massage therapist. He believes human well-being is deeply connected to the health of mind and body both, including deep tissues. He holds numerous certifications for best of breeds massage techniques helping him on a mission for healthy London and then rest of the world. He has been an active contributor in massage technique research and on Massaggi blog.
Facebook Twitter Instagram YouTube Subscribe Download Free Book